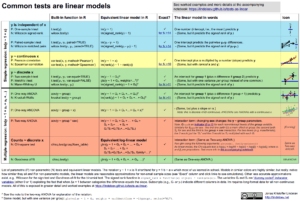 Thanks to my colleague Jenny Terry for tweeting this. More information at https://lindeloev.github.io/tests-as-linear/

I put together this paper of worked examples for the Gorard (GS) and Allen & Vignoles (D) segregation indices. It measures the extent of school segregation within a geographical area using Free School Meals (FSM) as an indicator.

By virtue of its title Innovations in Education and Teaching International sets its aspirations very high. I’ve just been browsing the latest printed edition where Stewart and Stewart’s article ‘Teaching Bayesian Statistics to Undergraduate Students through Debates’ grabbed my attention. Like most people I have been educated in classical (or frequentist) statistics and have virtually no knowledge of Bayesian statistics—hence the title caught my attention. The article has therefore reminded me to rectify my ignorance.

The title gave me no clue to what I was about to read about though. The lecturer (second author Wayne Stewart) performs debates between ‘frequentists’ and ‘Bayesians’ using two ventriloquist dummies—Freaky the frequentist and his opponent, a doll depicting Thomas Bayes (c.1701-1761) in his persona as a Presbyterian minister (photographs appear in the article).

Personally I find ventriloquist dolls pretty sinister. However as an approach worthy of the label ‘innovation’, it’s going to be hard to surpass. Most of the students found the dummies funny though and claimed to have learned from them.

Sepideh Stewart and Wayne Stewart (2014). “Teaching Bayesian Statistics to Undergraduate Students through Debates.” Innovations in Education and Teaching International 51, no. 6: 653–63. 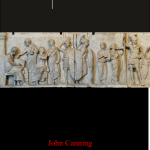 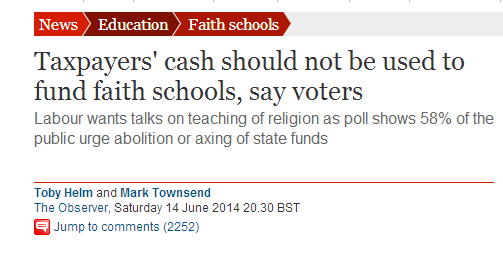 Taxpayers' cash should not be used to fund faith schools, say voters. Labour wants talks on teaching of religion as poll shows 58% of the public urge abolition or axing of state funds

The above headline in The Guardian intrigued me so I thought I would take a look at the actual questions asked. The survey was carried out by a company called Opinium on behalf of The Observer. On Twitter I tried to find out what questions were actually asked; interesting Richard Adams, Education Editor at the Guardian did not know, but said he would do some digging. I eventually found a pdf of the survey results on Opinium’s website.

In the interests of full disclosure I am a Christian with two children, one of whom is pre-school and the other attends a non-faith primary school. I did not attend a faith school myself. I’m not that interested in faith schools per se, but headlines such as the above invariably lead to debates about the relationships between religion and society that I feel duty bound to take an interest in.

The reason I’ve written this post is that I am very interested in questionnaire design. Questionnaire design is harder than most people think, but one would have thought a company which does surveys in its day to day work would be quite good at designing questionnaires. This one is so lousy I can only think it was politically motivated. It fact it is so bad I’m not entirely clear what the political motivation might have been.

Let’s start from the very beginning and take a look at Question 1. Respondents are asked to choose the opinion which is most like their own—note carefully -- not their opinion but the one that “best describes” their view of faith schools.
There are only three possible opinions plus a ‘Don’t know/ No opinion’ option.

The three available opinions are:

The best describes bit might be some sort of attempt to meaningfully take into account some of the nuances involved in such arguments but how views such as the following, which I suspect are widespread, fit into these three options.

As 1 and 2 above indicate there is really no such thing as a faith school, merely schools which are in one way or another connected to a specific faith, religion or belief system. Faith schools vary of course within faiths —Oasis academies, CoE voluntary aided village primary schools and ‘fundamentalist’ Christian private schools could all be described as Christian faith schools but they are certainly not the same in their ethos.

Question 5: In your view, how serious a risk is there of some predominantly Muslim schools encouraging their pupils to adopt extremist views?

1.Very serious
2.Quite serious
3.Not very serious
4.Not at all serious
5.Don’t know/ no opinion

The only specific religion mentioned in the survey is Islam. I’m not sure how one could answer this question in any meaningful way. This is in the context of the recent ‘Trojan Horse’ controversy of course, the full facts of which have not really emerged. The ‘Trojan Horse’ schools are not faith schools, or Muslim schools, but schools in which most children (and their parents) identify as Muslims. Overall 74% of those questioned thought there was a serious risk (i.e. very serious or quite serious), but what do we mean by extremist views? Extremists, however defined do not need extremist schools to incubate their views and activities. A lot of teachers would probably feel they are being credited as having far more influence on young people than they actually have.

A couple of further points: Although the findings are available there is a statement of confidentiality in the footer of each page. This may have been an oversight, or it might be a case that this data was never meant to be made public. I’ll assume the former until I have evidence to the contrary. It is also unclear how the survey was carried out, though it is possible to register with Opinium as a 'survey filler in' and I suspect people who fill in surveys are less likely to be in the ‘No opinion’ camp.

Whatever the truth the 58% figure does not strike me as particularly likely or unlikely—I’m not even sure if this is higher or lower than what I suspect would be the percentage of people disagreeing with schools having a religious ethos or culture. The Observer is evidently trying to influence the Labour Party on the matter of faith schools. I just wish they had designed a better survey.

I have put many of my teaching resources in the humbox where anyone is welcome to download and reuse them. They are primarily used as handouts in face-to-face contexts, so most would probably need adapting to turn them into materials suitable for purely online context. Most are available under creative commons licenses, but please check first.

My profile on the humbox

Further resources I have produced for sharing are on other project websites such as SPEAQ (Relating to quality assurance and enhancement) and Getting the Most Out of Feedback which has resources for students and staff on feedback and student evaluation.

There is also my Statistics for Humanities online book.

I had an unexpected surprise when I 'won' some Taylor and Francis vouchers on Twitter. One of the books I chose was Henry R Neave's Statistics Tables: For Mathematicians, Engineers, Economists and the Behavioural and Management Science.  In the preface to this second edition the compiler writes:

[Teaching statistics In the 1970s] I was unable to find any tables suitable for the course. So there really was no alternative but to develop a set myself (p.3).

One of the challenges of writing Statistics for Humanities was actually finding statistical tables which did not have a copyright on them or which were otherwise non-ambiguous in terms of intellectual property. Requests for information on twitter and mailing lists of copyright experts were inconclusive-- some stating that the tables belong to the persons who complied them and other citing 'fair use' or the view that ideas or numbers cannot be copyrighted.

Either way I'm now in possession of Neave's tables. This doesn't clear up the issue in any way, but I'm pleased to have a copy to hand.

Quantitative skills in the humanities