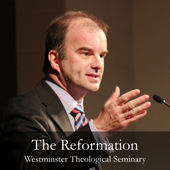 Over the past two weeks I’ve been making my way through a series of lectures on the Reformation by Carl Trueman of the Westminster Theological Seminary in Pennsylvania. I understand the lectures form part of a masters’ degree. They are available free through iTunesU.

The first thing I should say about the lectures is that I am enjoying them. They are well presented, full of interesting facts, contain some interesting and sometimes funny stories, and contain a great deal of Trueman’s own scholarly analysis. The course is also very broad covering the reformation from a historical as well as theological perspectives (not that Trueman would suggest the two approaches could be divorced). I’ve listened to the first seven lectures, which have focused not only on the person of Martin Luther himself, but also the geo-political situation of the German states and Holy Roman Empire in the early sixteenth century. Occasionally students ask questions which try to relate Luther’s experience and views to trends and movements in contemporary Christianity. While this may be expected in an evangelical Christian seminary where the students are in or are preparing for ministry, Trueman resists any attempt to draw such parallels and always falls on the side of constraint. Luther himself is a complex individual, his theological and political thought evolves over his lifetime and he lived five centuries ago.

However, I did not start this post with a view to discussing the Reformation, Martin Luther or Carl Trueman, but the nature of the traditional lecture. There are an astonishing 33 lectures in this series, most just under an hour long. I don’t know how the lectures fit into the Seminary’s (orthe accreditor’s) credit system, but 30 hours strikes me as a huge amount of the contact time for one ‘module’. The students ask occasional questions, all of which Trueman thoughtfully answers.

My own practice as tutor on the Postgraduate Certificate course for new lecturers could not be more different from the traditional lecture. My own input is generally short, activities tend to be group and discussion based, and assessments are varied. I’m well aware that some new lecturers would quite like to come to an hour long lecture where they could take notes, not be called upon to discuss as a class or in groups and write an essay and/or a traditional exam for the assessment, but such passivity goes against what I believe about learning.

My own undergraduate study was very lecture-based assessed mainly by unseen two-hour exams at the end of each module. There was some ‘coursework’, but the exams probably made up around 70% of the assessment. Most of those lectures were actually very interesting, but it was the small group tutorials which encouraged me to learn think independently and develop intellectually into the sort of person who could undertake postgraduate study.

Listening to and enjoying Carl Trueman’s lectures has presented me with an intriguing dilemma about teaching in higher education. Trueman lectures are incredibly detailed. Each time I listen to one I look forward to the next. I almost feel I am walking in Luther’s shoes. However, I really need to ask myself whether this is the best way for Trueman’s students to learn? It is tremendous that I can sit in East Sussex listening to fascinating lectures from Pennsylvania, but I will not be taking the exams and writing the essays. If I had to write an essay, a project or exam I would be somewhat overwhelmed that I could possibly produce anything interesting or original. If I taught about the reformation (which I don’t and never will as it’s not my area) I would be very tempted to tell students to listen to these lectures., and use my own time in the classroom differently.

Perhaps it is the enthusiastic amateur (like me in the case of the reformation) who benefits the most from freely available online lectures like these. I listen to ‘sage on the stage’* drinking his wisdom in a way I could not possibly comprehend if he was in my area of expertise. Trueman relates stories of email arguments he’s had the various (named) individual scholars. He tells of how one of his book reviews exposed so many factual errors it led to a whole edition getting pulled.** This is a teacher and colleague to fear!

Note: I’ve picked on Carl Trueman because that is what I’m listening to at the moment. I’m sure my feelings would be the same of a lot of other publically available online content.

**Carl Trueman (2012) You Cannot Judge This Book by its Cover: A Review of Evans, G. R. The Roots of the Reformation: Tradition, Emergence and Rupture. IVP Academic, 2012. The publisher brought out a second edition with corrections.