As well as the content itself, the thing I like best about this website is that it extends the life of materials Pauline and others developed at the Learn Higher Centre of Excellence in Teaching (CETL) funded in the late 2000s. Sadly, many of the great resources developed by these centres have disappeared entirely  from the internet, or are archived on websites not updated since their funding ended. Pauline has done (and is doing) a great job to reinvigorate this important work.

A couple months ago I wrote a short post on drawing following a session on visual research methods led by my colleague Pauline Ridley. A couple of weeks ago I attended a session led by Professor Alison James from the University of Winchester who is, among other things, an accredited facilitator of LEGO® SERIOUS PLAY®

Visual methods offer the opportunity to convey concepts that are difficult to communicate in written or oral forms. As I indicated in my last post, it is not the purpose of visual methods to interpret artefacts that participants have produced but to enable participants to use their artefacts alongside other methods.

In the session Professor James set the brief along the lines of building a Lego® model of our professional lives and the (not great)  picture shows what I produced. 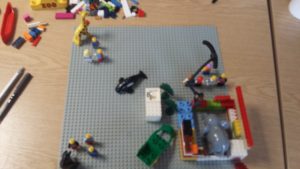 I am the character at the edge of the room, which is dominated by an elephant. I didn’t have a any particular views of what the ‘elephant is the room’ represents, but there always seems to be some elephant in any room I happen to occupy. ‘I’ am waving some Lego piece which seeks to represent a distance communication device trying to communicate over long and short distances. All, but one of the Lego® people have their backs to me. There is Baudrillardian sense of my trying to communicate while no else wants to listen. My audience, whether students, colleagues or potential readers of my research don’t seem to want listen while I am communicate things I think are important. They are interested in, or distracted by things like giraffes or giant penguins.

On reflection this representation is a highly egotistical one. I have set myself as the one with message to communicate while everyone else is just supposed to listen. I’m saying “Hey, look at me! Look at me!”, but no one is really interested in looking at me. There are more interesting (and possibly more attractive) things to be looking at. My audience is either distracted by more entertaining pursuits or, more probably, trying not to get eaten by the sharks that circle academia. In ‘real life’ everyone else is trying to communicate too, and perhaps to them I’m the one who is distracted either by the trivialities of my research interested or fighting my own sharks. Although wheelbarrow and sink unit represent my home DIY projects,  the model is notable for the absence of any meaning outside academia. I can feel like a marginal voice in academia, but academia is itself invisible to wider word whether for seemingly legitimate reasons such as major economic and political events or the outrage about Zoella’s £50 advent calendar (now half price + 100 Boots Advantage points) .

There are those with no voice at all and no means to communicate. I sometimes get a persecution complex, but as a university educated white straight male I have my back turned to a lot more people than I am facing. The model clearly fails to convey my own privilege. Perhaps a fairer model would have millions of Lego® people standing behind me.

My two attempts to draw the concept of ‘learning’ (as challenged by Pauline) appears below. (A discussion of my drawing abilities would require a more substantial blog post).

The first image represents a very traditional image of teaching and learning. A teacher (on the left) talks and ‘transfers knowledge’ to the seated student who makes notes. It is interesting that this was the first things that came to mind as I has spent many years emphasising the need to escape didactic knowledge-transfer approaches to learning and teaching.

The second image was inspired by a remark made by Mark Goodwin who was my personal tutor during the second year of my geography degree at Aberystwyth. He said something to the effect, “It’s called reading for a degree for a reason... you are supposed to read”. (The image is supposed to be of a person reading a book). That utterance took less than 10 seconds to pass his lips, but it is something I’ve never forgotten and pass onto others.