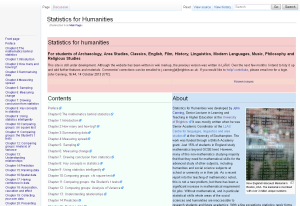 I have spent the past couple of months putting the Statistics for the Humanities book into an online format. After much deliberation I have used the MediaWiki software to do this. They is still a lot of tidying up to do and its not quite finished but comments are very welcome.

It is not a collaborative wiki  a là Wikipedia , but I am open to the idea of setting it up so logged in members can amend, add and improve content.  At the same time I would not wish the character and level of the material to change in such a way as to  do against the actual point of the website.

Please do let me know what you think about the site itself and ways in which others might contribute.